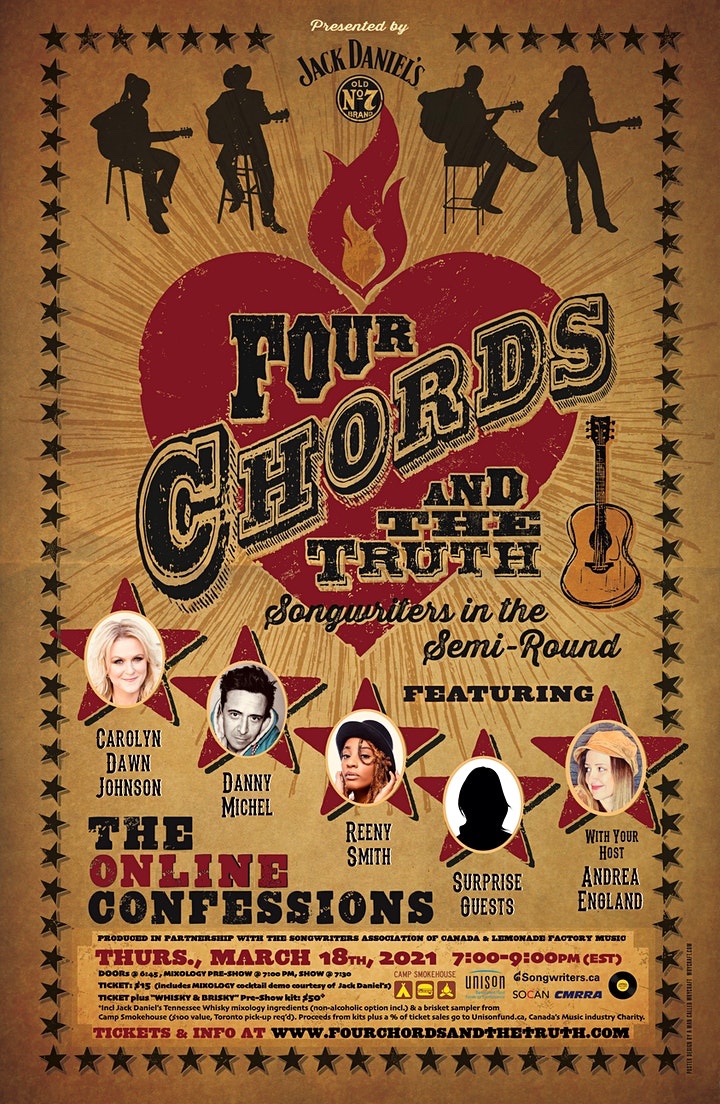 Get your tickets here!

Check out Andrea’s “Laundry” video below!

“Andrea continues to prove her talent with words is no flash in the pan. The stories are decorated in wonderful images and turn of phrase. Many songwriters sing and write fairly good melodies but to catch that ear with a clever line in a lyric over and over is talent of a rare kind. Joni Mitchell has it, Dylan, Leonard Cohen, John Prine, Lucinda Williams and several others – who are famous. Despite still flying below their radar, Andrea deserves the special attention for her detailed, concise writing ability and fine voice. She is economical in her approach but the recipe is flavorful, consistent and memorable.” – John Apice, No Depression

“…This makes the world a better place. If there’s a Juno for unaffected innocence it should go to this second release by Sand Point, Nova Scotian born singer/songwriter, coming off a seven year hiatus since the 2005 debut release of her debut, Lemonade. Hope & Other Sins 10 neatly crafted country leaning-songs are tunefully melodic and believable in their straightforward narratives. The now-Toronto based artist has the enviable quality of sounding exactly like the characters she’s created…” – Peter Goddard, The Toronto Star

“It’s a tossup as to what’s cooler: the fact that Andrea England sounds like the Heartless Bastards doing Tom Waits, or that she has dressed up this bluesy, bourbon-scented beauty in 16 coats of shimmering Hammond.” – The Straight.com ( on “Hothouse Flower”)

“The songs are autobiographical, personal, honest and universal. The performances are potent as you might expect; England’s vocals are delicate yet strong, powerfully supported by the band’s precision. The album is filled with hope … the sin would be that nobody hears it.” –  David Kidney, Critics at Large

“It’s clear how Andrea’s a songwriter through and through; the record easily sounds like something Kathleen Edwards or Tina Dico would release. This record has great folk moments that reveal themselves in top-notch pop production. Listen to the memorable “Laundry” and be sure to get a copy.” – Noah Siegel, New Canadian Music

“Our Folk Playlist pick is the airy upbeat love song, ‘Laundry’. A poignant telling with universal appeal with its clever lyrics, nice hook, lovely vocals, and an ending that caught me off guard. The kind of ending that begs the replay. – Not The Opera, A Spotify Guide

“From its stunning cover art to its intriguing title, “Hope & Other Sins,” Andrea England’s new album opens up into nothing short of a musical masterpiece. One of the most poetic lyricists writing today, England possesses that rarest of abilities, crafting music which enhance her words. Whether tracks with pared down accompaniment or a full ensemble of great musicians, the album will move anyone with anything above the barest of sensitivities… Experience a writer/singer/musician who is clearly at the top of her game.” – Tony Tedeschi, Music Columnist, AOL’s patch.com

“Incredible songwriting… fans are in for a treat with this new album” – John Gavin, Atlantic Seabreeze

“Andrea manages — with all the success of a Nik Wallenda — to walk the fine lines between acoustic folk, thoughtful country, and “commercial” pop music. Sincere and smart, these are songs that stick to the inside of your head and uplift your heart.”– Richard Flohil

“Andrea England will casually rip your heart out, give it a cool lecture, put it back gently, and leave you wondering if it really happened.” – Brian Allen, Songwriter/Producer (Heart, Toronto, Marshall Dane)

“Andrea’s lyrical and melodic sensibilities are unmatched by most.  She always takes me somewhere new and exciting 3 & 1/2 minutes at a time.” – Rob Wells, Songwriter/Producer (Cyndi Lauper, Mika, Justin Bieber)

“Just 2 songs is all it took for me to become a fan of artist Andrea England. Canada doing Folk/Americana right.” @Winecowboy